When you call Sgt. Poopers, an owner answers the phone. Not a machine.  Not an answering service in California who can only "have someone call you back." We are locally owned in Dallas, Texas. When you call us, you get instant answers, decisions and action.

Our customers appreciate us and the feeling is mutual. We do a lot for just a little and our standard of quality is perfection because we believe that's what customers deserve. We also protect every client in the urban forest with our eyes and ears... and noses. For example, we've detected more than a dozen natural gas leaks in backyards. Atmos told several of our clients they were lucky to be alive thanks to us. With all our services comes responsibility, no extra charge.

For nine years we ran Sgt. Poopers in our spare time. Erica was a top paralegal in Dallas, some would say the top. I am a writer and advertising creative with half a million words published, 70 logos, 77 TV spots, 125 films and videos, 250 print campaigns, 33 package designs, and 110 websites including this one. Sgt. Poopers started in May 2008 with a Beatles motif and a simple website. In 2017, I decided to go full time in Sgt. Poopers. Only when I started to clean yards myself did I realize "You can go all day and not even see a dog!" That's when it hit me. We were not in the pet industry. We were in the business of conservation.

So we changed directions abruptly. I relaunched the company with a new look, logos, ranger uniforms, and this website. I brought in a new business model. Services. Prices. Protocols. Procedures. Employee Handbook and Services Manual. Full computerization and GPS tracking. Within a year and a half, we had  tripled in size.

In November of 2019, Erica quit as a paralegal and also joined Sgt. Poopers full time. That day was a milestone for her because Sgt Poopers was originally her idea. She even came up with the name just as we closed our eyes one night.

At the state and federal level, rangers are assigned to be custodians of our great parks and forests. Their job is to protect and conserve public lands, water, and wildlife. But they do nothing for private property. Your yard is our parkland and we protect it just like .gov rangers do.

Conservation is a "dirty job" as TV's Mike Rowe would say. But what job isn't? Most "clean jobs" are polluted by deadlines and unreal expectations, monotony and wage disputes, office politics, scope creep, moving goal posts, broken agreements, senseless rules, discrimination, not to mention the deterioration of health from sitting in a chair all day. Our Conservation Rangers can't clean up your job, but what we can do is restore the sanctity of your own backyard where Mother Earth provides a refuge and Nature can soothe your soul.

A special thanks to Mike Rowe for being the Voice of Opportunity in a world of misdirection.

My interest in conservation started early on.

On Ellsworth Ave, just off Mockingbird in Dallas, is a house my grandmother, Cordye, built in 1940. My father, a decorated pilot, buzzed that house in a P-51 Mustang at the close of World War II. He flew just above the tree tops at full power — 2,000 horsepower rattling doors, dinner plates and imaginations throughout the neighborhood and causing considerable consternation back at Love Field.

Two decades later the thunder of world war was gone. There, I spent many quiet days in my youth doing "yard work" with Cordye. To her, caring for property was part of the daily schedule. And so were planted the tenets of land stewardship in the fertile soil of a childhood mind.

My wife came to Dallas by way of Paris...Texas, that is.  Growing up in rural Texas, many of her best friends had four legs. That devotion was strengthened by her early experience as a veterinary technician.

Perhaps a business founded on the combined principles of conservation and love for animals was meant to be.  What started with her interest in animals matured into a passion for protecting the environment. When we started Sgt. Poopers in 2008, we didn't know where the effort might lead.  It was just a small business we ran on the side. But every year it grew. Sgt. Poopers matured into a going concern with exacting yard-cleaning protocols.

In Memory of Maria

Erica's inspiration for Sgt. Poopers was a little rescue dog named Maria. When just a puppy, she found Maria abandoned along a lonely stretch of Oklahoma's Indian Nation Turnpike in 2006. Of course, there's a little  story:

Erica was heading home to Texas when she started to feel an inexplicable dizziness. She pulled into a rest stop where she saw a black puppy trying to get in another traveler's car. They shooed the puppy off and vanished in the rain. Erica stepped out into the cold and the little dog came right over and fell into her arms.

Erica's dizziness vanished as she wrapped the puppy in a towel and turned up the heat. The ordeal left the puppy rigid with anxiety. But after half an hour, probably at the limit of exhaustion, the puppy took a deep breath, completely relaxed and fell into a deep slumber.

I met Erica a few months later. The first time I knocked on her door, a little black dog poked her nose through the blinds and acted like she "recognized" me. When I stepped in, the little dog went bananas, running up the wall, and barking joyfully as if she had foreseen the event. The message was unmistakable, "He's the one! He's the one! It's him! He's HERE!!"

I was taken aback because I had only just met Erica a few days before and I did not know yet if I was "the one." But turns out, somehow Maria knew.

Maria: 2005 – 2017. Her sweet spirit and unconditional devotion are the inspiration for Sgt. Poopers.

Maria was a show stopper. Her sweet spirit pretty much stunned passersby wherever we went. If you've ever wondered why the words "unconditional love" and "man's best friend" are oft-quoted with dogs, I wish you could have met her. She could have showed you. It was in her eyes.

Maria left us too soon in October, 2017. But before she left, she also inspired us to have a child, the human kind.

Today, Maria's gift of unconditional love continues to nurture and shape who we are as a family and as a business. Our mission is not just to conserve Dallas' land and water resources, but also to raise community awareness and promote good stewardship for the environment. Our work compliments fellow conservationists in the Dallas Storm Water Department and volunteers in "For the Love of the Lake" including those who test and monitor water quality in the thirteen creeks that feed White Rock Lake.

Real conservation requires the cooperation of thousands. We're proud to be a part of that effort providing more than 26,000 conservation services per year. We invite you to go green "with a little help from your friends." If you have any questions, please call us today at (214) 563-6379. For your convenience, you may also request services from this site.

We would like to thank you for your interest in Sgt. Poopers. We look forward to serving you in the near future!

534 Aqua Drive, Dallas, Texas 75218 | This email address is being protected from spambots. You need JavaScript enabled to view it.

We have 124 guests and no members online 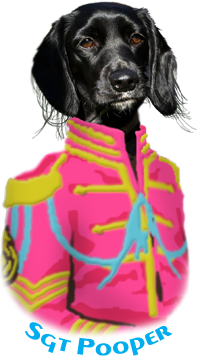 It was ten years ago today
Sgt. Pooper showing us the way
Raking up every mile
Guaranteed to raise a smile
So may I introduce to you
The one you've known for all these years
Sgt. Pooper's Lovely Yards Club Band.

We don't really want to slow the flow
But we thought you might like to know
Our guy's gonna sing a song
In case you wanna sing along
So let me introduce to you
Our Conservation Marketeer
Sgt. Pooper's Lovely Yard's Club Band.

What would you think on a Spring afternoon, would you turn and pretend not to see?
Show me your lawn and we'll clean all year long, we'll keep it all waste-free.

Do you need anybody?
“I need my yard renewed”
Could it be anybody?
“I just want the germs removed.”

When 700 billion microbes are just wild about your yard, their enthusiasm is contagious

Do you flush just
once a week?

Prevent feet and paws from tracking in millions of germs, diarrhea and disease with daily yard cleaning, starting at just $9/day!

Are YOU on the menu?

WIRELESS RADIATION
It's Enough to Make You Sick!

Simply being in your home or office shouldn't be killing you. But it is! GET THE FACTS before it's too late.

Beauty is in the nose of the beholder

We get rid of the smell by getting rid of the bacteria that cause it. Our odor control service eliminates odors so your nose can appreciate the beauty of clean.

If there was an all-natural pest control that really worked, it would earn thousands of five-star reviews.